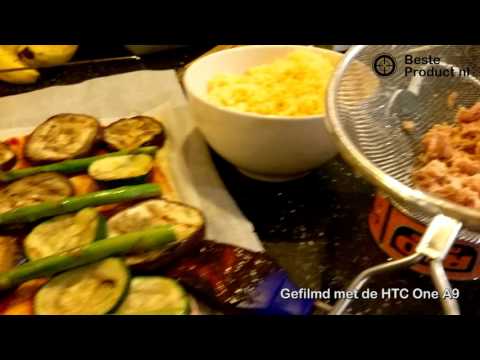 Tweakers.net
HTC ONE A9 REVIEW
7,0
Digitaltrends.com

Even though it regularly makes stunning phones, HTC hasn’t had an easy time in stores. Sales of the M9 are poor, and the company needs to recover quickly. Making a less-attractive iPhone imitation worked the magic for Samsung with the Galaxy S3 years ago (and again with the Galaxy S6 this year), but can it work for HTC’s arguably better looking iPhone 6 lookalike? Only time will tell, though we suspect the pricing may sink this ship before it even has a chance to leave port. Initially, HTC priced the 32GB One A9 at $400, making it $250 less than the iPhone 6S. It was a great deal – you got a phone with more or less the same specs and build quality for less money. However, $400 was the promotional price, which ends on November 7. From that point on, the One A9 will cost you $500. For that price, you can get a 64GB Moto X Style Pure Edition, which has a significantly better processor, sharper screen, more storage, and a customizable design that’s also quite premium. It may not be all metal, but it’s a more powerful phone, which will likely get software updates more quickly than the A9. The only area in which the One A9 trumps the new Moto X is with that Android Pay-ready fingerprint sensor and the all-metal body. The $500 price also puts the One A9 at about $100 more than a 64GB OnePlus2, which has comparable specs, but its much harder to get. Google’s Nexus 6P also offers faster processing, a better screen, Pure Android, and a comparable all-metal build for the same price. To sell this phone, HTC needed to cut the price down to the bone and blow away the “flagship killer” competition. A $300-$400 price tag would have worked, but $500 will not – The competition is just too fierce this year. If you want a stellar Android phone on the cheap that looks good and has high-end specs, the Nexus 6P and Moto X Style Pure Edition are better deals than the HTC One A9.

Digitaltrends.com
HTC One A9 review: the Android iPhone
7,7
Theverge.com

Many will be turned off by the One A9’s copycat appearance, but that’s a judgment on the phone’s maker and not the phone itself. And besides, HTC hasn’t just imitated how the iPhone looks. The One A9 also comes close to the signature ease of use and smoothness of Apple’s software, aided by the presence of Android Marshmallow, which feels closer to iOS than any previous version. HTC SOLD ITS SOUL TO THE COPYCAT DEVIL AND GOT THE LOVELY BUT OVERPRICED A9 IN RETURN At its promotional price of $399 In the United States, the HTC One A9 is an easy phone to recommend. Its refined aluminum design is much more lovable than Google’s plastic Nexus 5X, and the simple pleasure of using a phone is important when you’re considering a thing you’ll be spending most of your waking time with. But when the price jumps to $499 in a week’s time — as well as for all other regions across the world — the One A9’s value diminishes greatly. It then matches straight up against Google’s Nexus 6P, the best Android smartphone to date. The winner of that contest is always going to be Google’s handset, which also comes with the long-term assurance of receiving updates faster and for a longer time than any other device. As much as I believe in the One A9’s flagship class credentials, there’s no denying that you’ll get more for your money if you spend it on LG’s G4 and its excellent camera, Samsung’s Galaxy S6 and its wireless charging, or even the iPhone that HTC is complimenting with its present design. HTC has built a really great phone that’s easy to love, but it’s dressed it up like an iPhone and given it a matching price premium. That works for Apple, but not for HTC.

We love the HTC One A9 and we think it's the most exciting handset HTC has launched in 2015. We'd pick it over the M9 because it has charm that the flagship lacks.

Pocket-lint.com
HTC One A9 review
8,0
TechRadar.com

To compare this too much to an iPhone would be unfair to the genuinely impressive power under the hood - but it's curious that HTC has decided on this design path.

TechRadar.com
HTC One A9 review
6,0
Cnet.co.uk

Although it's great to see the latest Android Marshmallow software arriving on a mid- to high-end phone so soon after its launch, the HTC One A9 fails to impress in almost every other respect. Its full HD screen and raw-shooting camera are welcome, but are also available on the One M9, which came out in March. Its processor meanwhile seriously underperforms, and its battery doesn't put up much of a fight either.

Cnet.co.uk
HTC One A9
6,0
TrustedReviews.com

Overpriced and undercooked, the One A9 isn’t going to propel HTC back where it wants to be.

TrustedReviews.com
HTC One A9 review
6,0
Theinquirer.net

The HTC One A9 is by no means a bad phone. In fact, given its high-end design, improved software and great camera, it's one of the company's best.

Theinquirer.net
HTC One A9 review - HTC's best smartphone yet
8,0
Expertreviews.co.uk

The One A9 is a gorgeous phone with a superb screen and camera, but at this price it just isn't fast enough to compete with other flagships.

Expertreviews.co.uk
HTC One A9 Smartphone
8,5
NotebookCheck.net

Design instead of performance? The design and the price of the new HTC One A9 are high-end, but the performance is only mainstream. Can this work?

Connect.de
HTC One A9 Review – HTC is back in the game
7,8
dxomark.com

With a DxOMark Mobile score of 78 points, the One A9 performs noticeably better than other recent HTC smartphones, and after several devices with disappointing imaging results, puts the Taiwanese manufacturer back into competition with other high-profile brands. Looking at specifications and price point, the HTC One A9 can arguably be classified as an “upper mid-range” smartphone. However, thanks to an optical image stabilization system and a fast F2.0 aperture, it arguably has advantages in terms of camera specifications over HTC’s high-end model One M9 that comes with a 21MP sensor but slower F2.2 aperture and no optical stabilization. The specification differences translate into real-life results and in the DxOMark image quality testing, the A9 outperforms its higher-priced cousin in almost every aspect. The HTC One A9 isn’t quite up there with the current very best smartphone cameras, but performs on a similar level to Google’s Nexus 6 or the Samsung Galaxy S5, making it worth a closer look for mobile photographers using the Android operating system.

I went into this review not expecting a whole lot from the HTC One A9; its "me-too" design and midrange specs just don't live up to the its "low cost flagship" ambitions. Although it proves to be a perfectly acceptable phone in most ways, the A9 doesn't have the chops to justify its high price tag. For nearly the same dough, you could grab one of Motorola's excellent devices. A fully-loaded 64GB Moto X is the exact same price, and even though we haven't tested it ourselves yet, we feel pretty confident that it's a better overall phone than the HTC. Heck, it even has the front-facing stereo speakers we missed so much when we used the A9.

While the HTC One A9 isn’t strictly a member of the current top tier of smartphones, you’d hardly know that from its performance, especially in the camera department. Although the A9’s 13MP sensor can’t quite match the level of detail in images shot by an iPhone 6s, Galaxy S6 or LG G4, it comes close. Low light performance is also comparable to the major players, and crucially, it produces better overall image quality than the disappointing One M9. If you can cope without stereo speakers and Ultra HD video, and also live with its slightly anaemic battery, then the One A9 makes a far better choice than the One M9. It’ll need to fall further below the £400 mark to really threaten the Galaxy S6 and LG G4, but as it stands, the HTC One A9 is high quality and high-performing camera phone.

ephotozine.com
HTC One A9 review
8,0
Whathifi.com

The HTC One A9 feels like a mixed bag, but one that still has enough goodies to make it an enjoyable phone – the latest Android OS and some nifty camera features will appeal to many. Picture and sound quality might not be class leading, but they’re appealing enough. As is the HTC A9 overall – it’s not groundbreaking, but a nice smartphone to use nonetheless.

Whathifi.com
HTC One A9 review
6,0
ITPro.co.uk

The HTC One A9 is an rather fine mid-range smartphone - especially now that it's more reasonably priced.

Reviews van de HTC One A9

Specificaties van HTC One A9